So now we have some answers. I watched a report on CBS news a story about a warehouse that was raided in New York city. The warehouse contained an incalculable amount of raw materials for the production of Spice.

The 100 pound bags piled high to the ceiling will probably contain the organic material that the chemicals contained in the 55 gallon cans will be sprayed upon. That is how the so called potpourri is made. We know the truth, this is the Synthetic Marijuana that is flooding our nation. In the CBS report, it is stated that the chemicals come from China. I can just imagine a container ship loaded to the brim with this dangerous chemical. In today’s world we demonize the user, but Nation States are never chastised when they send untold amounts of this poison to our shores. That is the way of the world today. Our so called leaders attend their high classed functions and pay lip service to the public they are supposed to represent, while the drug trade goes on. We will see how they feel when a family member dies after they consumed Spice at some frat party in college.

Here we see the Police all wearing oxygen tanks when they storm the warehouse, that is how deadly this drug is. So the chemicals are shipped from China in bulk, then it is sprayed on some organic material that resembles and smokes as if it were Marijuana.

Here is the pile of Synthetic Marijuana ready to be loaded into the packaging that will have printed on it not for human consumption. Surely this pile of Spice is enough to kill a thousand people. 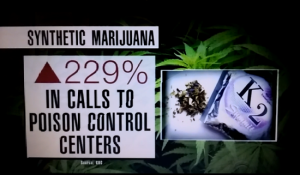 So there you have it, this is how it is done. The politicians clamber for more fighter jets and billion dollar weapons systems to enrich the Carlyle Group and the Military Industrial Complex, to supposedly protect our Nation. Meanwhile they sit back and do nothing while China ships untold quantities of the chemical used in the production of Synthetic Marijuana into our ports unimpeded. Now is the time to call your elected representatives in Washington and beseech them to do something about this Abomination.

Man has suffered from the affliction of addiction for Millinia. I propose that addiction is a relative thing that only exists as it is defined. Man is not alone in the world of addiction. Nonhuman species also indulge in the consumption of mind altering substances and can suffer from the dependecy of addiction. I am adding and referencing online articles that you can search and read, I strongly sugest that you read them and do your own research. Here are some examples.

Locoweed refers to any plant that produces the chemical swainsonine. It is thought that horses are initially attracted to these plants because they remain green longer than other plants once winter comes around. However, they begin to seek it out for its intoxicating effects, increasing their use over time. Farmers do their best to eliminate locoweed from their properties, as its frequent consumption is damaging to the animal’s health. A study published in the Journal of Animal Science in 2003 found that horses that ate the weed for two weeks developed significant weight loss and signs of depression. Swainsonine interferes with a metabolic enzyme, resulting in the buildup of the simple sugar mannose in neural cells. If severe, this buildup can lead to heart problems, reproductive difficulties, and neurological damage to the horses.

Tasmania is a leading producer of opium poppies for the pharmaceutical industry, supplying the morphine necessary for the production of painkillers. There’s only one problem: wallabies love the poppies. They’ll raid a field, gorge themselves on poppies, and crush the plantations in the process. As reported by BBC in 2009, the issue of stoned wallabies was even discussed at a parliamentary hearing on the security of opium crops in Tasmania, with the country’s attorney general stating that wallabies were “entering poppy fields, getting high as a kite, and going around in circles.”

Although Man is not alone in his struggle with addiction, Humans are the only Species on the planet that seeks to Profit from addiction. Profit is a fractal thing that can take many forms. Profit can simply be a monetary thing, the act of buying a product cheaply and selling it for more. Profit can also be defined as domination, such as in Law Enforcement, where the Police subjegate a population through the introduction of an intoxicating banned Substance. Bureaucratic totalitarian governments can enslave whole populations by both introducing and banning substances at the same time. Or as in the case of the British, a contralled substance can be used to fund an Empire.

In America today drug use is rampant. Mexico is renown for flooding the United States with drugs that have become ever cheaper. In the 1970’s Cocaine was considered a rich mans drug. Presently it can be had cheaply and is mostly delivered straight to your door, very much like pizza. After more than a decade of War with Afganistan, Heroine use is reaching epedemic levels on American streets. It is rumored that American troops guard poppie fields in Afganistan. 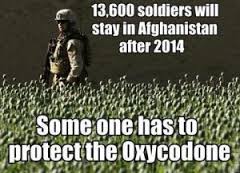 So now we see what it is all about. It is a historical fact that the CIA introduced large quantities of Cocaine into the predominately African American populations of California. Now the CIA is controlling the Heroine trade in Afganistan, all the way to distribution on American soil. Heroine use is epedemic in every state in America. The true players in this game are never held accountable, while the people who have been enslaved risk encarceration every time that they are in possesion of the drug.

Now there is a new drug, a derivatve of an old drug. Synthetic Marijuana began as a way to study the medicinal properties of Marijuana. One of the brightest minds in america created more than 450 synthetic canabanoids to use on unsuspecting human test subjects. John W Huffman then later published an article in a scientific journal that had every bit of information nescessary to produce this potently dangerous drug, all in the name of science and the furthering of his demonic carer. I refer to John W Huffman as the Spice Devil.

So now this abomination is not only killing people in your town, it has reframed the meaning of a word famous unto the history of the world. Spices were once more valuable than gold. The spice of life once referred to all the good things in this world, now the word is immediately associated with addiction and death.

Veterans theater recently published a Youtube video in which Dr. David Boje and myself set out to purchase Spice. There had recently been a raid by the local police and the DEA. The raid was characterized in the newspaper as having dealt a huge blow to the smoke shops that sale the Spice. Dr. Boje wanted to see for himself if Spice was still readily available. We consulted with James Sassak on where to buy it and what code words to use when we made our attempt. I had known of this deadly drug for some time, but had never consumed or purchased it. We spent considerable time planning our ‘ Sting ‘ and we were uncertain if we would succeed. We had it in our minds that We would be rejected as to clean cut, or not looking like a Spice addict. When the time came we pulled up to the Smoke Shop that we had been told was selling it, we found that all of our planning and conniving was totally unnecessary, it was all to easy to buy the Spice. A smiling courteous young man quickly sold us this deadly drug. The package had the brand name of Enchanted Forest, for ten dollars we got enough to roll twenty spice joints. We quickly destroyed the contents of the packadge. The Smoke Shop where we made our attempt, is within easy walking distance from the local Homeless shelter that has been the epicenter of many Spice poisonings.

The street level spice dealers will buy these same packadges and then roll the tiny ciggerretes that are known as spice joints. Not only to maximize profits, but due to the fact that spice is so potent and deadly that a large inhalation will put you in a coma. The dealers will then sell each one for two dollars apeice. Two dollars is not much to scrape up if you want to get high, be careful or after having consumed your tiny spice joint the EMT’s will be scraping you up.

That very same day a long time friend of James Sassak smoked one of those same tiny Spice joints. Gilbert Marquez lingered three days in a coma and just yesterday was removed from life support. He now lies in a vegative state, brain dead waiting to expire. He was well known in Las Cruces New Mexico and will be sorely missed.

It is all to easy to dismiss the homeless population as hopeless drug addicts that will do anything to get high, often risking their very lives. I believe that homeless populations can through the transparent lives that they live serve as a barameter of the health of the cities that they live in. a survey found that eleven percent of high school age children have experimented with Spice. If they survive long enough they will probably be found amongst the homeless some day. Their young lives will have been destroyed before they even enter adulthood.

Who is producing and flooding our cities with this dangerous drug? Why are the Smoke Shops that already profit greatly from the addiction of tobacco so willing to sell it? Why is our Omnipotent government so impotent to stop this epedemic? Why was it ever created?

I will end here and leave You to answer these questions in the comments that I hope you will make. We must for the sake of our society and the lives of our children answer these questions and keep the conversation going. Inaction is also an action and while you sit thinking that this is not your problem, your child could be experimenting with synthetic marijuana.

.The Rise of the Opium Trade | The History of Prohibition …

HYPERLINK “http://www.google.com/url?“<9 Animal Species That Use Psychoactive Substances In The …