So now we have some answers. I watched a report on CBS news a story about a warehouse that was raided in New York city. The warehouse contained an incalculable amount of raw materials for the production of Spice.

The 100 pound bags piled high to the ceiling will probably contain the organic material that the chemicals contained in the 55 gallon cans will be sprayed upon. That is how the so called potpourri is made. We know the truth, this is the Synthetic Marijuana that is flooding our nation. In the CBS report, it is stated that the chemicals come from China. I can just imagine a container ship loaded to the brim with this dangerous chemical. In today’s world we demonize the user, but Nation States are never chastised when they send untold amounts of this poison to our shores. That is the way of the world today. Our so called leaders attend their high classed functions and pay lip service to the public they are supposed to represent, while the drug trade goes on. We will see how they feel when a family member dies after they consumed Spice at some frat party in college.

Here we see the Police all wearing oxygen tanks when they storm the warehouse, that is how deadly this drug is. So the chemicals are shipped from China in bulk, then it is sprayed on some organic material that resembles and smokes as if it were Marijuana. 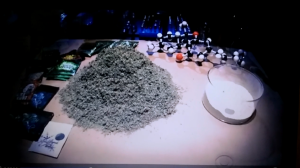 Here is the pile of Synthetic Marijuana ready to be loaded into the packaging that will have printed on it not for human consumption. Surely this pile of Spice is enough to kill a thousand people.

So there you have it, this is how it is done. The politicians clamber for more fighter jets and billion dollar weapons systems to enrich the Carlyle Group and the Military Industrial Complex, to supposedly protect our Nation. Meanwhile they sit back and do nothing while China ships untold quantities of the chemical used in the production of Synthetic Marijuana into our ports unimpeded. Now is the time to call your elected representatives in Washington and beseech them to do something about this Abomination.